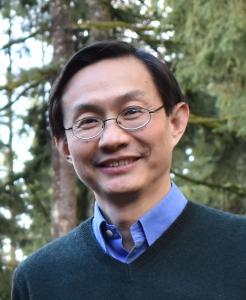 Hailin Wang received B.S. and Ph.D. degrees in physics from the University of Science and Technology of China and the University of Michigan in 1982 and 1990, respectively. He was a research investigator at the University of Michigan and subsequently a staff consultant at AT&T Bell Laboratories. He joined the University of Oregon in 1995 where he is now a professor of physics. Dr. Wang has made important contributions to the current understanding of coherent as well as incoherent optical processes in semiconductor nanostructures. He also made the first experimental demonstration of amplitude squeezed light from an injection-locked diode laser and developed a fused silica optical resonator that feature highly directional evanescent tunneling. His work on exciton spin coherence and biexciton coherence has recently led to the first demonstration of electromagnetically induced transparency for interband optical transitions in semiconductors. His current research interest includes optical manipulation of quantum coherences in semiconductors and especially its application in both classical and quantum information processing. Dr. Wang is a recipient of an NSF-CAREER award and is a fellow of the Optical Society of America.